Patients are easier to anesthetise and the risks of urinary tract infection are lower, these are, among other things, the advantages of kidney stone surgery performed with patient lying in the supine position, to be routinely introduced for the first time at the Urology Clinic of the UD.

In Hungary patients lie in the prone position when stones larger than 2 cm in diameter are removed, but the Clinic Centre of the University of Debrecen would like to abandon this method. The first laser kidney stone surgery on a patient in the supine position performed at the Clinic of Urology was carried out during the Debrecen Urology Days last May. The novel type of intervention was introduced by Zoltán Kiss, specialist of the clinic, who had mastered the method from Ioannis Kartalas Goumas, Chief of the Endourology Division of Vimercate Hospital, Milan. 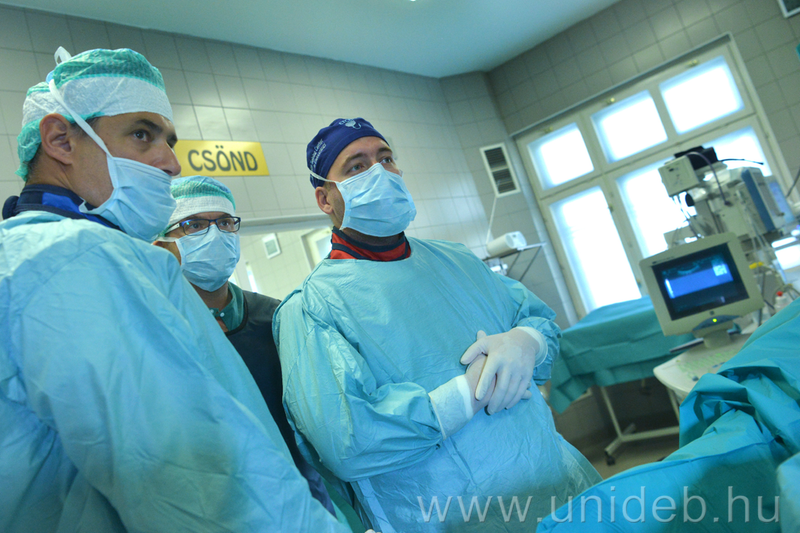 - Paradoxically, for traditional reasons, it was kidney stone surgery in the prone position that became well-known world wide in spite of the fact that the intervention performed in the supine position has several advantages both from an anesthesiological and an operative aspect. Interestingly, in Mediterranean countries, the supine position is used in routine practice to treat large kidney stones, Zoltán Kiss told hirek.unideb.hu.

According to the specialist the supine position typical in Hungary makes surgery particularly difficult. One difficulty is that the staff have to turn patients over during surgery and  there are also patients who, due to, e.g., overweight or severe respiratory disease, cannot even be turned on their stomachs.

During the novel type of surgery which is regarded as a pioneering one special cushions are used to make sure the patient is in the appropriate, supine position. Then the kidney stones are removed  through a 1 cm incison of the skin using endoscopy.

- Some of the major advantages of the procedure are greater ease of anesthesia and the possibility to minimise risks of post-surgery urinary tract infection due to lower pressure in the kidneys. A further special feature is that this intervention can be combined with endoscopic kidney stone surgery through the urethra, the specialist detailed. 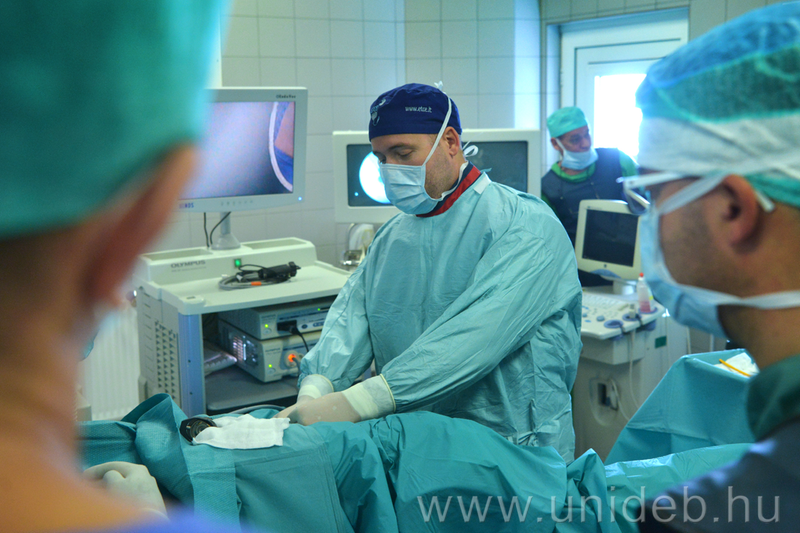 Since the first surgery of this type at the Debrecen Clinic Zoltán Kiss has used this procedure several times. Last September, assisted by three Italian colleagues, he used this method to remove  kidney stones  from three patients.

- Although kidney stone surgery in the supine position is not  yet an established one in Hungary, due to its benefits, the Debrecen Clinic would like to use it routinely together with the introduction of combined surgeries, Tibor Flaskó,  Director of the Clinic said.

Every year about 180-200 kidney stone surgeries are performed at the Clinic of Urology, University of Debrecen.