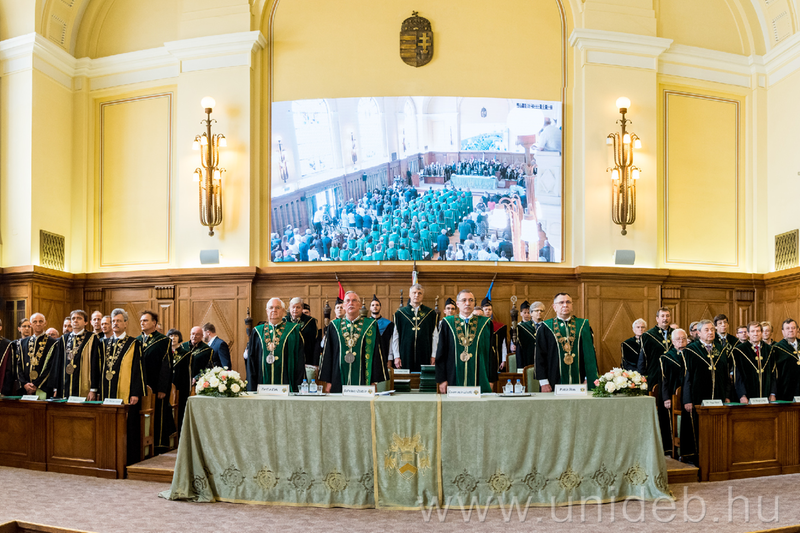 - "In the future, hundreds more will receive this recognition of their academic preparedness at our university. But in most cases, it will be the opening of their academic career rather than its crowning." said László Csernoch in his opening speech, quoting from the first doctoral ceremony held at the Debreczen Hungarian Royal University on December 18, 1915. The University's Deputy Rector emphasized, however, that an academic career can only be achieved if it is supported by wider social and narrower university framework. In our rapidly changing world, the future of higher education and social progress is clearly research and development, innovation and internationalization. It is thus of particular importance that Hungarian higher education holds its place in the international education and research space… This challenge cannot be answered except by further strengthening the quality requirements in university education and by further supporting students who are diligent, talented, and committed to acquiring knowledge. 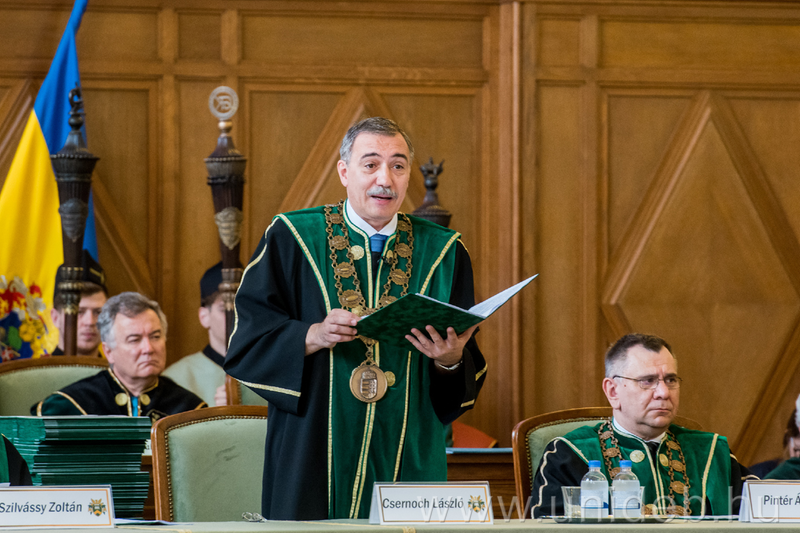 The doctoral candidates swore the oath with their right hand to their hearts, raising their left hand on high: "I vow that I will behave according to the expectations of the University of Debrecen. To my best knowledge, I will work to improve the university's reputation. Respecting academic ethics, I serve academic progress, universal human culture and the preservation of national values. ” 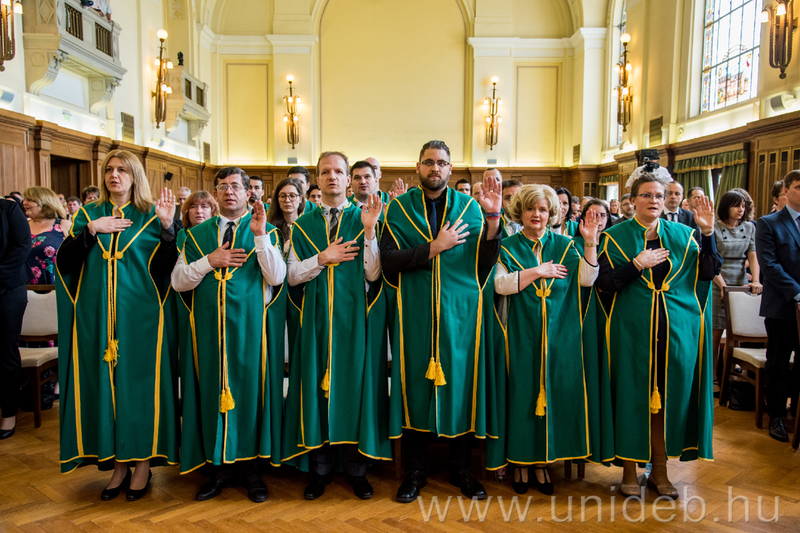 - Dear New Doctors! A few minutes ago, you received a PhD degree. Our university has declared you mature and fit for independent research in Hungarian and international academic life. Allow me to thank you, on behalf of myself, the Senate and the University, and to wish you the right opportunities and success in your academic careers. Zoltán Szilvássy, Rector of the University of Debrecen, greeted the new doctors with these words. 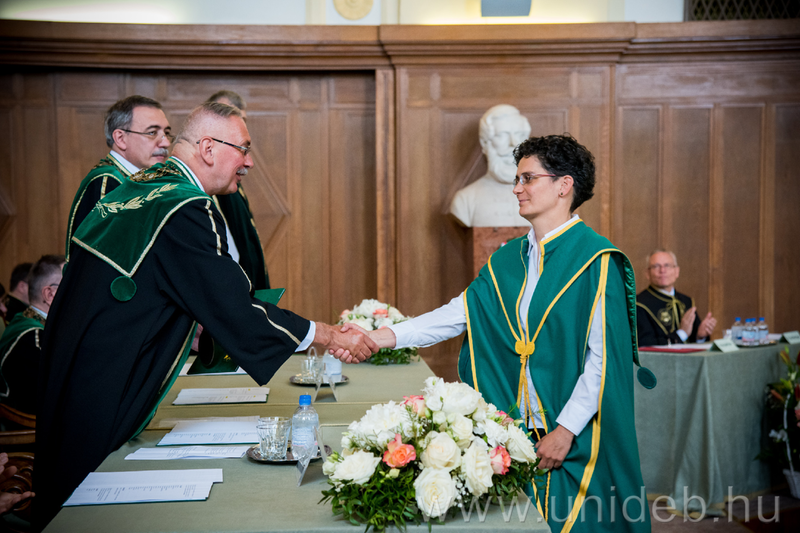 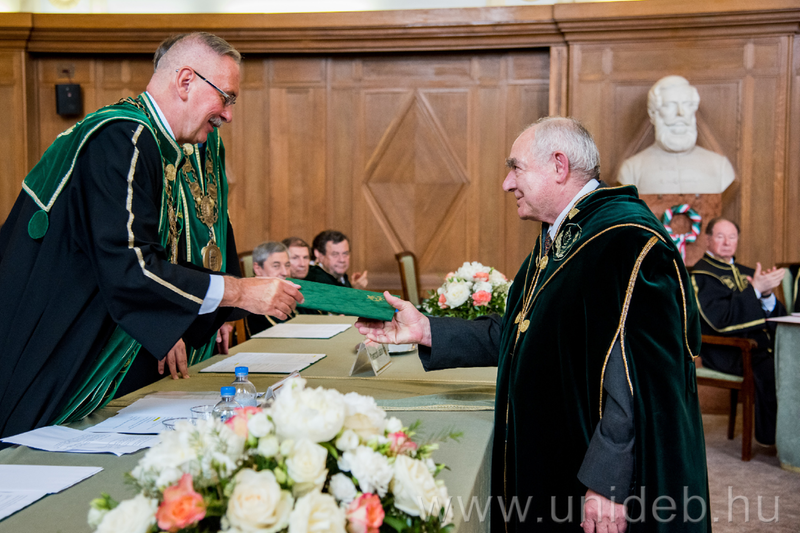 Professor Emeritus recognizes the performance of the University's best professors, and the work they have done for the University, and provides rights and conditions for their further activities.

The ceremony continued with the award of honorary doctorate titles, which were awarded to the ethnographer, Hans-Werner Retterath, Deputy Director of the Ethnographic Institute of the East European Germans of Freiburg, instructor at the European Institute of Ethnology at Albert-Ludwig University, Freiburg, and Alexey Grigorijevich Zabelin, of the University of Finance and Law, Moscow (MFUA), who is rector of the institution, correspondent of the Russian Academy of Education, member of the Academy of Humanities, President of the Moscow Chamber of Law, and member of the expert council of the DUMA State Education Committee. 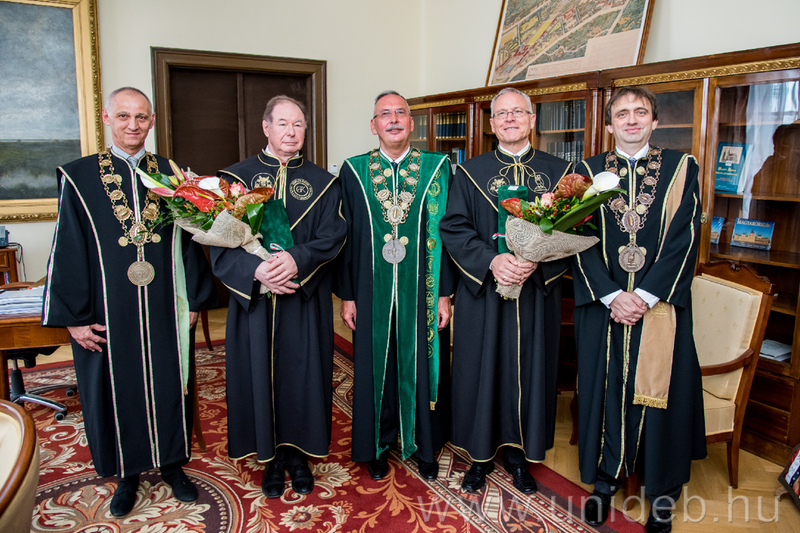 - The honoris causa doctoral title is a high degree of recognition that our university only awards in exceptional cases. It occasionally honors former great students and outstanding professors, but from time to time also recognizes Hungarian and foreign scholars who have earned international recognition, and who enrich their scientific field by publishing their academic results, emphasised László Csernoch, vice-rector. 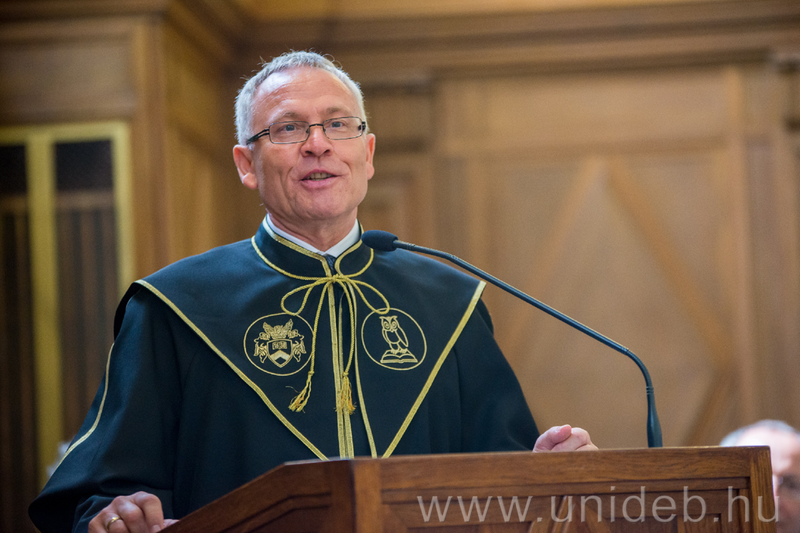 - This award is a source of great joy and pride for me. Unfortunately, for many people in Europe, it is not yet known that in the 18th and 19th centuries, Debrecen was a fortress of enlightenment. The most outstanding names for me are István Radványi, Mihály Csokonai Vitéz and Sándor Petőfi. The University's Department of Ethnography is also taking this idea forward, while the values of one's own and other nations are being examined so that we can move on a common European path. In this sense, we will continue to work together. said Hans-Werner Retterath, on receiving the title of Doctor of Philosophy. 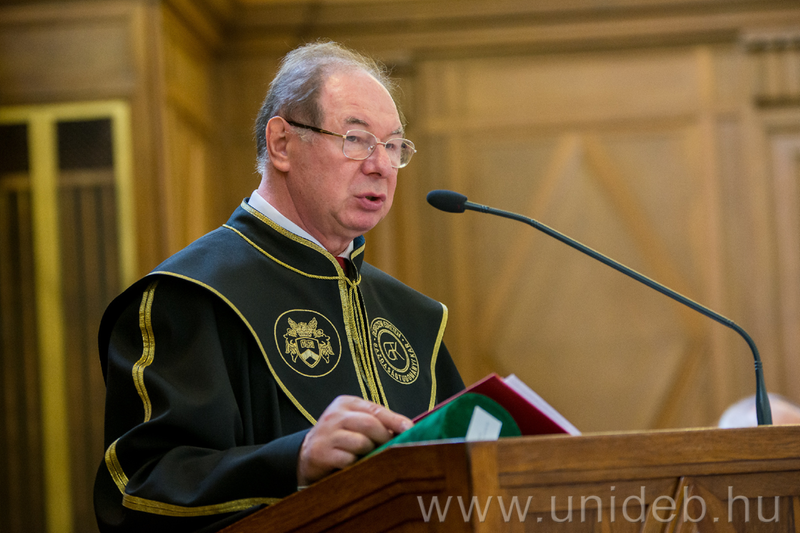 - I hope that further development of relations between our universities will be an important element in strengthening intergovernmental relations between Russia and Hungary in the fields of education, science and culture. As rector of the Moscow University of Finance and Law, and now as a Doctor of Science at the University of Debrecen, I would like to assure you that I will continue to work tirelessly to strengthen cooperation between our universities and to develop university and cultural programs, said Aleksej Grigorijevic Zabelin, the new honorary doctor of the University of Debrecen, in his speech of thanks.

The doctoral candidate ended with the National Hymn at the Main Building's Aula, opening a series of summer graduation ceremonies starting on June 14 at the University of Debrecen.